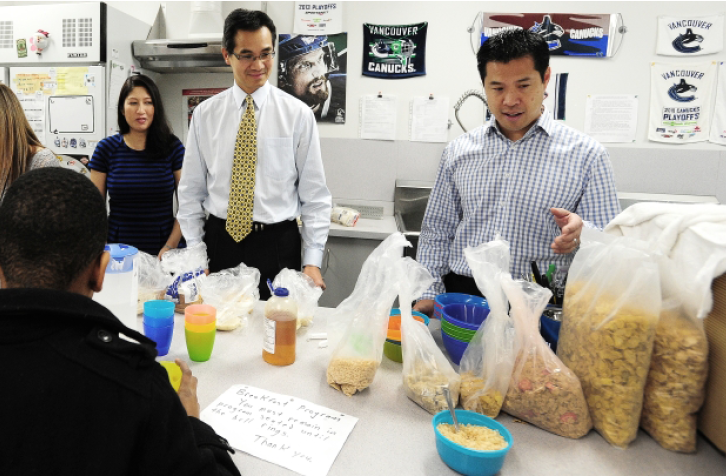 There are few schools in Metro Vancouver with such a sublime view as Burnaby’s Capitol Hill Elementary, where to the east and north lies an unobstructed panorama of mountains.

Its quaint, 100-year-old wing with its false bell-tower on the roof (all now seismically upgraded) is on display to traffic passing along East Hastings Street, while its modern north wing can be seen from Holdom Ave.

One school formed of two different structures joined together.

That’s much the way it is in the surrounding community.

“We have a very diverse (school) community here,” said principal Kelly Chow, “and we try to support everyone.”

And like many schools in Metro Vancouver that have pockets of poverty in their catchment areas, that support starts early in the morning with a breakfast for children arriving at school having had little or nothing to eat.

“We have from between 20 to 40 kids a day getting breakfast. It fluctuates, but on average we serve 370 breakfast meals a month,” Chow said. “We need to feed them because they arrive here hungry.”

All such breakfast programs in the Metro region are paid for by private donors. Capitol Hill receives money from Vancouver’s Tzu Chi Foundation, the Burnaby Firefighters, and the Capitol Hill Community Hall, amounting to about $2,500. Last year, it also received $2,000 from a donor who is unable to make a contribution this year.

So Vancouver’s Assante Capital Management have stepped in, donating $2,000 to the school through The Vancouver Sun’s Adopt-A-School campaign.

“We are thrilled to be able to help and make a difference in children’s lives,” said Debra Tarigan, a senior administrative and marketing associate with Assante.

Tarigan and her supervisor, David Woo, visited Capitol Hill before the school closed for the Christmas holidays to meet Chow and see the breakfast program in operation.

“We decided this year that instead of giving our clients presents – they are pretty privileged and don’t really need it – we’d help out a school,” said Woo. “It’s hard to believe, given how wealthy this province is, that there are children coming to school without food.”

The lack of a stove in the kitchen means staff who help out can only serve a cold breakfast.

“They get toast, cereal, fruit, yogurt, bagels. If we had a stove, we could give them eggs in the morning or make pancakes. I’m sure they would like that for a change,” said Chow.

The kitchen has a place for a stove and a hookup, but Chow needs $1,500 to buy one and the utensils to go with it. There is no money in the budget, and with education cutbacks it is unlikely there will ever be.

“It’s something we had hoped to get,” he said.

He said families struggling with poverty seldom ask for help.

“They are too proud. It usually comes out when we ask families for money to pay for field trips. It’s not a lot of money, but some parents admit they can’t afford it. When that happens, we take care of it. We never allow a child to miss an experience because of lack of money,” said Chow.

“We try to reach out and support families, but it’s a difficult conversation at times because they just don’t want to talk about it.”