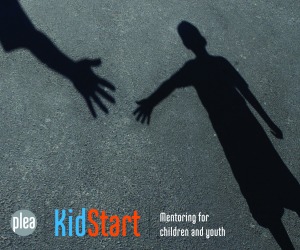 As a team, we strive to provide meaningful contributions through volunteering and through financial contributions.  We like to focus our efforts on charitable organizations who provide support to children’s health, literacy and social welfare.

KidStart is a one-to-one-mentoring program that provides a caring trained adult role model to help vulnerable kids thrive and connect with the community they call home.

The following is a story about James, one of the kids who is in the program and being mentored by Scott.

James* came to our KidStart program in 2013, when he was 10 years old with many challenges, both at home and in school. James’ mom simply could not cope with the tensions between her and her son. James was withdrawn, angry and very isolated from family, social activities and his school attendance was sporadic. His mom and teachers knew something was wrong and, as he continued to struggle, a counsellor was called in. James was immediately referred to KidStart.

James met his Volunteer Mentor, Scott, and for over a month refused to speak more than a few words to him. Scott, with the support of his KidStart Coordinator, continued to try new activities that James might want to do and, no matter what, he showed up at James’ door at the same time every week. After noticing how much James liked looking at photography, Scott showed up with a camera for James to try. The smile on James’ face was enough for Scott to know this was a good thing for his buddy. Every week they looked at the pictures James was taking and slowly James began to open up to Scott.

James was being bullied and tormented by an older group of kids at his school. The shame and fear were making it difficult for him to attend school and make friends. Withdrawing completely was the only way he could cope. Scott was the only person he trusted to talk about this. Scott worked with his KidStart Coordinator to support James and his mom to connect with other supportive services. Slowly, and with ongoing support, James began to smile more, laugh more and his participation in school improved. He also showed real talent with his photography. Expressing a desire to learn more about photography, James joined the 50 kids that KidStart sends to summer camp programs each year.

Already a year later, James and Scott still meet every week. James’ favorite thing to do is to photograph the lego models they build together outside so they appear like real buildings in his photos! James wants to make structures like these life-size one day. At KidStart we know that, with a little support from dedicated volunteers like Scott, James can stay on a path that will give him the confidence to dream big.

Here’s where you come in.
We need your help to give other kids like James a start.

Please join us by becoming a supporter of KidStart – the one-to-one mentoring program for kids and youth in your community.

*The names used in this story have been changed to protect program participant privacy.