A frequent complaint from would-be investors is that “uncertainty” is what keeps them out of the financial markets. “l’ll stay in cash until the direction becomes clearer,” they will say. So when has there ever been total clarity?

Alternatively, people who are already in the market after a strong rally, as we have seen in recent years, nervously eye media commentary about possible pullbacks and say, “Maybe now is a good time to move to the sidelines.”

While these kneejerk, emotion-driven swings in asset allocation based on market and media commentary are understandable, they are also unnecessary. Strategic rebalancing provides a solution, which we will explain in a moment.

But first, think back to March 2009. With equity markets deep into an 18-month bear phase, the Associated Press provided its readers with five signs the stock market had bottomed out and followed that up with five signs that it hadn’t. 1

The case for a turn was convincing. Volumes were up, the slide in the US economy appeared to be slowing, banks were returning to profitability, commodity prices had bounced, and many retail investors had capitulated and gone to cash.

But there also was a case for more pain. Toxic assets still weighed on banks’ balance sheets, economic signals were patchy, short-covering was driving rallies, the Madoff scandal had knocked confidence, and fear was still widespread.

Of course, with the beneift of hindsight, that month did mark the bottom of the bear market. In the intervening period of just over five years, major equity indices have rebounded to all-time or multi-year highs. 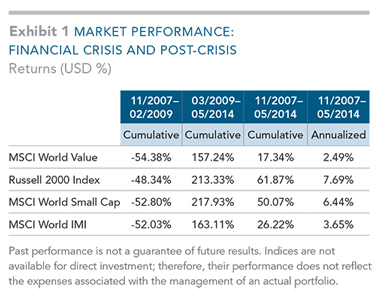 For those who got out of the market at the peak of the crisis, waiting for “certainty” has come at a cost.

Keep in mind that these past five years of recovery in equity markets have also been marked by periods of major uncertainty including Europe’s sovereign debt crisis, U.S. debt ceiling issues, and China grappling with the transition from export-led to domestic-driven growth.

There was a broad range of views about likely outcomes and how these possible scenarios might impact financial markets. The big question for the rest of us is what to do with all this commentary.

The fact is, even the professionals struggle to consistently add value using analysis of macroeconomic events. And history suggests that those looking for “certainty” around such events before investing could be setting themselves up for a long wait.

There is always something to fret about – has the market topped out or will the rally continue for some time?

What is the average investor supposed to make of all this conjecture – debate the market implications of news and to try to anticipate what might happen next? But whom do you believe? We’ve seen there are always cogent-sounding arguments for multiple scenarios.

An alternative approach is much simpler. It begins by accepting the market price as a fair reflection of the collective opinions of millions of market participants. So rather than betting against the market, you work with the market.

That means building a diversified portfolio around the known dimensions of expected returns according to your own needs and risk appetite, not according to the opinions of media and market pundits about what will hapenn next month or next week.

Say you have chosen an allocation of 60% of your portfolio in equities and 40% in fixed income. A year goes by and your equity allocation has rallied strongly so that the balance between the two has shifted to 70%/30%. In this case, it makes absolute sense to take some money out of shares and move it to bonds or cash.

It works the other way too, so that if shares have fallen in relation to bonds, you can take some money out of fixed income cash and buy shares. Essentially, this means buying low and selling high. But you are doing so based on your own needs, rather than speculating on what happens in the market next.

Of course, this doesn’t mean you can’t take an interest in global events. But it does spare you from basing your long-term investment strategy on the illusion that somewhere, at some time, “certainty” will return.